As part of Oklahoma City’s revitalization efforts, SandRidge Energy—a growing, independent natural gas and oil company—relocated its suburban headquarters downtown. The company’s corporate master plan encompasses several city blocks and a number of different buildings, one of which is a 30-story modernist office tower in the Brutalist architectural style, designed in 1971 by architect Pietro Belluschi. A new 4,600-square-foot canopy structure serves as the unifying element for the new campus, providing a sense of cohesiveness and a sense of place to the city’s downtown urban fabric. Lighting consultant Renfro Design Group was asked to create a lighting scheme that would bring all of these elements together.  -Architectural Lighting 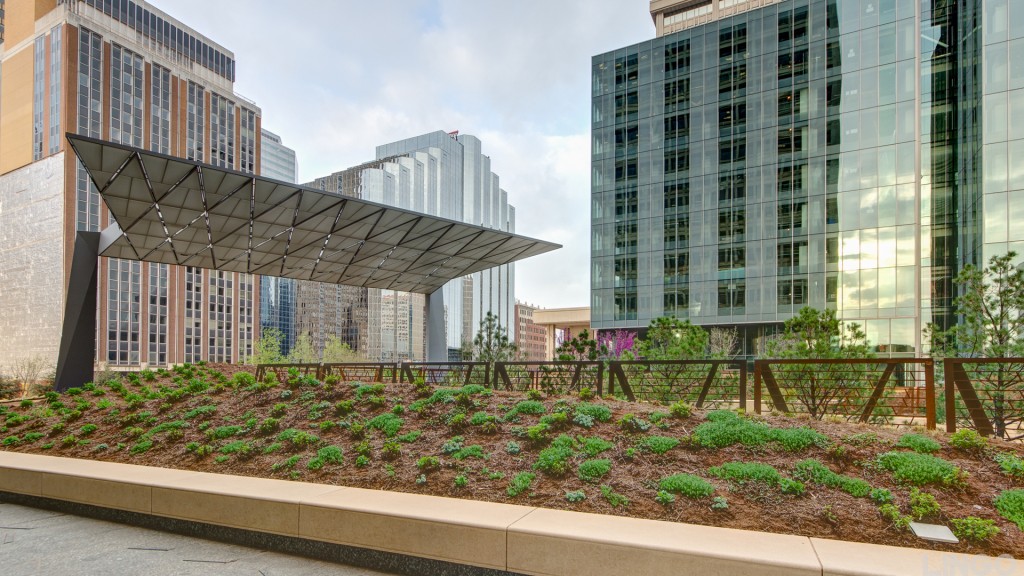 To light the façades of the Belluschi-designed office tower, Renfro’s team positioned yoke-mounted 4000K LED exterior floodlights atop a nearby parking garage. With the aid of aiming studies and mock-ups, two fixture positions were established and three beam-spread distributions—8 degrees, 13 degrees, and 23 degrees—throw the light accordingly. This creates an even distribution for the full 393 feet of the building, and also highlights the three different window shapes of the building’s upper, middle, and lower sections. The shadowing pattern, which is a result of the windows’ deep and angular recesses, serves as the design cue for the canopy’s triangular pattern. Besides serving as a new focal point, the 34-foot-tall canopy also provides shade relief for the outdoor plaza during the extreme heat of Oklahoma City’s summer months by using two layers of various density perforated metal. At night, the canopy structure is illuminated by 3000K integrated linear LED strips. Yoke-mounted halogen PAR38 downlights illuminate the plaza area below. Additional theatrical lighting is also in place when needed for events.   -Architectural Lighting